The show’s title, Tenebras Lux (Light from Darkness) comes from the Latin phrase "post tenebras lux,” a variation on "After darkness, I hope for light," which appears in the Book of Job, 17:12. Both artists emphasize paired-down, monochromatic color and subtle, evocative interactions of light and shadow. Whereas Volpe employs varying degrees of realistic imagery, Roberts takes a minimalistic approach, exploring the wide-ranging expressivity of pure abstraction.

“If you start with the premise that art reflects human experience, you have to be honest about that experience as you really live it,” Volpe says. The ​paintings in Volpe’s half of Tenebras Lux come from a series titled Stills from an Unknown Film. Volpe describes his work as “moody, indeterminate images for uncertain times.”

For his part, Roberts emphasizes his work’s engagement with the viewer. “In times of visual sensory overload, the viewer is invited across surfaces, cracks and disruptions,” he says, “where their own interpretation becomes part of the creative act.”

Roberts is an architect based in Boston’s North Shore. He began his career as an apprentice to Frank Gehry, teaching design and theory at Harvard, RISD and MIT, and spending several years as a consulting architect before turning to painting. Volpe hails from Hollis, NH, outside of Nashua. He earned a graduate degree in poetry from the University of New Hampshire before painting became be his primary medium of creative expression. 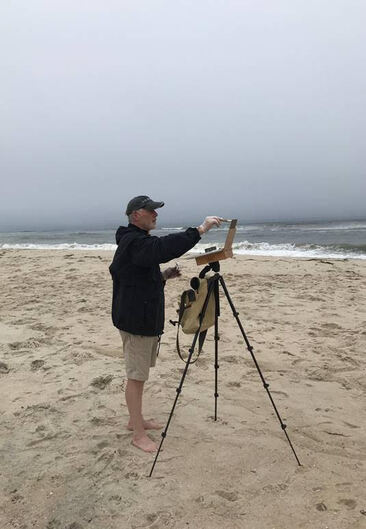