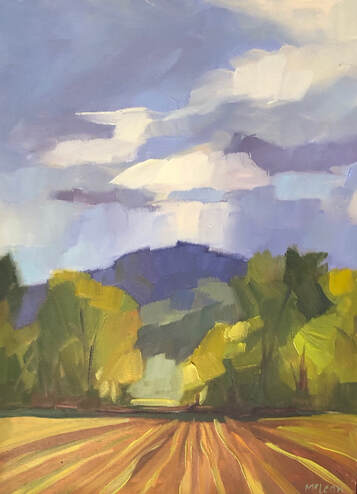 Rain Pending in Peidmontoil on gessobord, 6 x 8 inches
Meg McLean: When I was ten years old, what I wanted from life was simple; namely, to do a cover for The New Yorker. I also wanted a horse, but even I knew that was unrealistic. I grew up with my parcel of crayons and paints in Michigan’s Upper Peninsula where instead of trappings like cities or museums or grocery stores with avocados, we had squeaky-clean air, long dazzling winters, and magnificent Lake Superior. The lake was the backdrop to every view looking north, a slice of deep blue along the horizon. If my childhood had a theme color, that blue would be it.

I don’t remember a time when I wasn’t compelled to make pictures, influenced not only by the surrounding countryside and the art on a certain magazine cover, but also by illustrations in my favorite children’s books. I poured over them, making copies, trying to figure out how the artists did what they did.

Oddly, none of the people making these books lived anywhere near my neck of the woods. The East seemed to be the place for artists. When the time came for college, I headed to New England to study art.

I live here still, in New Hampshire, where we have squeaky-clean air and long dazzling winters. The landscape closely resembles those scenes in the children’s books that fed my imagination for so many years. And sure enough, you can't swing a dead cat around your head without hitting an artist.

I do miss Lake Superior, but in a pinch, there’s always the Atlantic Ocean.

And I’m still waiting for that call from New York . . .